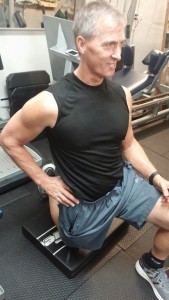 Mick Smith is the owner of Pro Sports and Fitness Training, Inc. He has developed a truly one of a kind portable gym and introduced a new way of conditioning with his 33 degree Incline Inflatable Hill. He takes it all to you!

He resigned from College coaching to take a more active role in Pro Sports and Fitness, sharing his enthusiasm and love of fitness and health with the community, from Weston to Miami, by going portable. Mick truly believes he can make a difference in the lives of others by showing them how to get fit, developing a stronger and more durable body, and simply being healthier. He understands the importance of people being able to perform lifelong activities with family and friends which in turn keeps them fit, happier and less susceptible to diseases associated with inactivity and obesity.

Prior to coming to the NBA, he worked 6 years as an assistant and then Associate Head Strength and Conditioning Coach at the University of Miami. He earned 3 national championship rings for football and appeared in 5 Baseball College World Series with the University of Miami baseball team. He also strengthened two Olympic Baseball and Olympic Weight Lifting teams.

He has Co-authored 3 books, written and published many articles, is an International lecturer, and has made appearances on television (AM Northwest), Blazer TV, Sunshine Network and many sports radio talk shows.